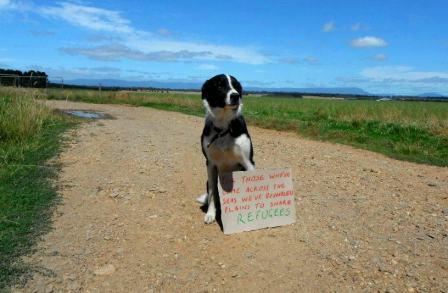 Our children are taught to sing these words in the national anthem: “For those who’ve come across the seas, we’ve boundless plains to share”. But we know, and they suspect, that it’s a lie.

And yet Australia had, until fairly recently, a proud history of welcoming refugees. Since World War Two we have welcomed generations of people fleeing war, starvation, ethnic and religious violence. The wealthy country we are so lucky to live in has been built to a great extent by refugees. Their ideas, energy, talents and passion have helped to create a society that has been the envy of the world.

In 1992 mandatory detention laws were introduced by the Keating Labor government, with bipartisan support. However tens of thousands of Vietnamese boat people, in spite of initial fears and opposition, were eventually welcomed by the Fraser and Hawke governments and have gone on to make a huge contribution to the life of Australia.

Then, in August 2001, the Howard Government refused permission for the Norwegian freighter MV Tampa, carrying 438 asylum seekers (predominantly Hazaras of Afghanistan rescued from a distressed fishing vessel) to enter Australian waters, contravening refugee conventions Australia had signed. He even made it an election issue, thanks to a compliant media and radio commentators who whipped up racist and xenophobic sentiments. He proved that harsh treatment of boat people could be a vote winner.

And so for the last 14 years, both major parties have tried to outdo each other in being tough on asylum seekers arriving by boat. The harsher the policies, the more popular they seemed to be. Even imprisoning people indefinitely in desert detention centres. Even locking up children.

Manus Island today represents the logical outcome of these cruel policies. Today, 1300 young men who have fled violence and mayhem in their home countries have been told they will never set foot in Australia. They are wasting away in appalling conditions without hope of even having their refugee claims assessed. In despair, some have tried to take their own lives. Reza Barati, an asylum seeker from Iran, was killed when guards and PNG locals stormed the centre.

Australia is better than this, as we have shown in the past. We can treat the small number of asylum seekers who arrive here in desperation with compassion and humanity, knowing that it’s only luck that we are not in their tragic situation.

Most Australians are compassionate people, who want a situation where asylum seekers and refugees are treated with dignity and respect, with hope for a better life. We want to live in a country that’s internationally renowned once again for our warm welcome, not for our unbending brutality. And we dream of leaders whose popularity does not come from competing with each other to administer cruelty.

Blue Mountains Refugee Support Group joins with many other organisations around the country in calling on our political representatives of all parties to return to policies that treat these most vulnerable people with dignity, fraternity and compassion, as we ourselves expect to be treated.

We call on government to abandon the policy of attempting to resettle refugees in PNG, Cambodia and other under-resourced countries, contrary to conventions we have signed up to.
We call on all political parties to demand an end to the secrecy and deliberate cruelty that occurs in detention centres, especially in Manus Island, and to introduce transparency, with independent oversight and swift, fair processing of claims. Then, for genuine refugees, to help them to build a new life in Australia with the right to work and to contribute to society, to their communities and to the betterment of the nation.

We believe that welcome is better than fear. That compassion builds a better nation than cruelty. That all people, no matter where they came from or how they arrived, deserve justice, dignity and opportunity.

Our dream is to make Australia once again a place of safety and welcome for those who have fled disaster and who plead for our assistance.

To our fellow citizens and elected representatives, we ask:

If you answer yes to these questions, we call on you to speak up at every opportunity, to demand and vote for the changes that will make our children and grandchildren rightly proud to call themselves Australian.

Photo thanks to Jacinta Sinclair