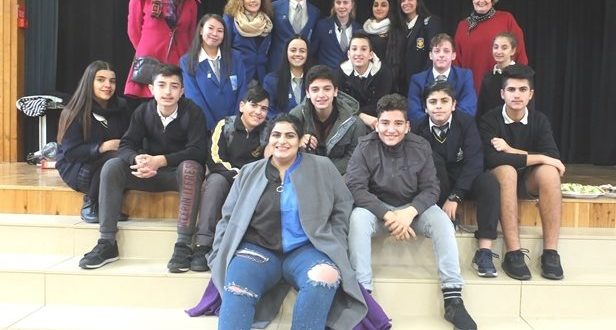 Refugee students from Miller Technology High in Cabramatta, Sydney, shared their life stories in a Tree of Life performance for Katoomba High School on Wednesday 19 June. The students, from war-torn Iraq and Syria, were part of Parramatta’s Treehouse Theatre that provides a platform for young refugees to act out their stories of plight.

Drama teacher Ruth Hartcher-O’Brien and school counsellor Catherine Maguire-Donvito, founded the Treehouse Theatre in 2010. Ruth and Catherine realised that their drama and counselling skills could be used creatively and therapeutically to help students deal with trauma and to learn English. Young refugees were encouraged to tell their stories of escape, trauma and survival through plays, song and dance. In doing so they were able to process their experiences and become more empowered to navigate the challenges ahead.

The young refugees, aged between 12 and 17, performed in front of 700 Katoomba High School students and their teachers. None of them had been in Australia longer than 2 years, with one arriving only 8 months ago.

The presentation was an abridged version of Tree of Life 2018: Caught in the Flood, with 7 out of 24 stories performed. The stories depicted life in their country of birth, the way in which war, conflict and persecution caused them to become refugees and what is was like to arrive in Australia.

The performance began with an insight into the normality of everyday life for these young people before they became refugees. In one story, Bassam, 15, tells us how he and his cousin steal some money to buy lollies, but they get caught and find themselves in hot water from their Aunty.

Other stories focused on the sudden upheaval when the refugee performers were forced to leave their villages, families and friends. Fidaa narrates hiding in a church with shooting going on outside. He ends his piece by telling the audience that for him, shooting and death are a normal part of life. Fidaa is only 14.

The performance ended on a humorous note, with Bassam, 15, telling us how he had to get 14 bags all on his own off the conveyor belt at the airport in Sydney. The rest of the performers, posing as bags, piled on top of one another and clearly revelled in the spotlight and the camaraderie. Katoomba High School students also joined in one of the skits, convincingly playing a flood of refugees.

Performing in front of so many Katoomba High School students there was little sign of nerves. Taking questions from the audience Fidaa said that it was hard early on performing in front of a crowd but now it wasn’t so difficult. The performers had been in the program for 5 months, rehearsing on weekends and in school holidays.

The young performers were collected, calm and seemingly normal teenagers, their manner belying the horror that each of them has lived through. When asked about the difference in schools between Australia and where they come from the reply, ‘in our school we get smacked for being naughty’ drew gasps and laughs from the audience.

The stories were poignant, funny, sad and horrific. None of the young refugees had wanted to leave their country, their villages, their friends or their lives.
The bravery of these young people to get up and perform their stories was remarkable. For, as Katoomba High Principle, Jennifer Boyle, reminded the audience these were ‘true and most importantly personal’ stories.

The performance not only allowed the young people to process their own experiences on stage but in sharing them provided a way to bridge the cultural divide between them and their audience. This process allows for the audience to think about their own perception of what a refugee is and perhaps go someway towards re-thinking what the word refugee means. For the students at Katoomba High School, the performance was an education as well as entertainment, allowing them to learn more about what it means to be a refugee. The performances reminded the audience of our common humanity, that refugees are just humans who have been through extraordinarily difficult circumstances and who overwhelmingly deserve our support, compassion and empathy.

The NSW government funded the performance with a Multicultural Grant to the KHS P&C.