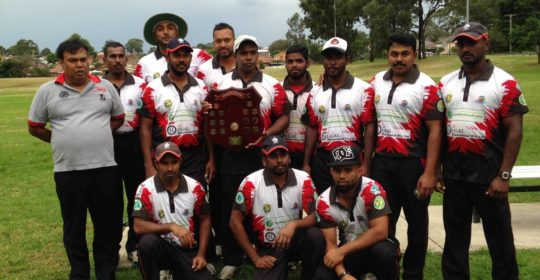 On Anzac Day 2017, Ocean12 Cricket Team and Australian Navy Cricket Team had a wonderful encounter at Darling Street Park Cricket Ground. On this memorable day, in their inaugural match, both teams played in a friendly environment.

Before the cricket match Ocean 12 and members of the Tamil community attended an ANZAC ceremony at Wenty Leagues where Ocean12 skipper Suthakar respectfully placed a wreath.

A minute’s silence was observed by both teams prior the start of the match.

Under a cloudy sky, Ocean12 Team batted first in a 15-overs-a-side encounter. Chanthuru Theivendran and Donald Redol started the batting well with an unbeaten 109-run partnership when Chanthuru retired with an unbeaten 50. Donald had scored 49 when he was caught. The Navy Team came strong by not only controlling the flow of runs but also by taking wickets. Some wonderful outfield catches were also taken. Ocean12 was 147 for 9 after 15 overs. Kane Duncan, the Captain of the Navy Team, captured 3 wickets for 11 runs. He was on hat-trick in his third over.

With a challenging target on the board, Navy Team lost their first wicket in the first ball. Krishna Palanimalai (19) and Max Martinson (20) scored some good runs, but the chase was difficult under dark skies and a steady drizzle. Navy Team persisted with their chase, but Dishanth Ramachandran took 4 wickets for 10 runs to control the proceedings. Sivarasa Manmatharasa got 2 wickets for 2 runs to close the match. The Navy Team scored 87 runs for 9 wickets.

Ocean12 Team, the Navy Cricket Team and the spectators observed a minute of silence, remembering the ultimate sacrifice of the fallen heroes before the match.

On behalf of the Navy Cricket Team, Richard Austin spoke highly of the Ocean12 Cricket Team and their intention to play regularly against them in the future.

On behalf of the Ocean12 Team, Sivarasa Manmatharasa appreciated the Navy Cricket Team for playing Ocean12 Team on a special day for them. He also said it was a strange experience for the players of Tamil background to compete as equals in a level playing field against the members of the defence force, considering their fear of the defence forces in their native country.
Ocean12 applauds the Navy Cricket Team for their fighting spirit under challenging conditions. Ocean12 is grateful to the Consortium of Tamil Associations, Lesly Gunaratnam, Logan Logathassan, Lakshmi Logathassan, Yathugiri Logathassan and Richard Austin for their contributions. Ocean12 appreciates all the supporters who were present despite the drizzle. Thank you to Hon Dr Hugh McDermott (Member for Prospect and a veteran) for his support for both teams.