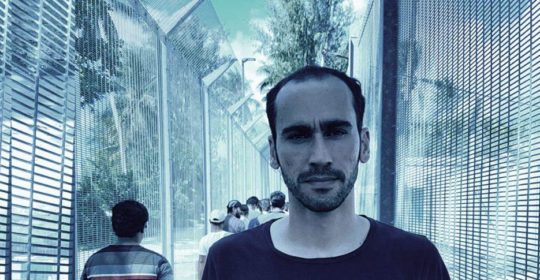 Kurdish refugee Mostafa ‘Moz’ Azimitabar today released a music video and song he recorded from his detention on Manus Island.

Moz, 31, has been detained for four years.   The vocals for his song – “All the Same” – were recorded on a mobile phone and, with the footage; found their way out of Manus to artists in Australia. In the clip, Moz sings into the camera, surrounded by tall wire fences, and implores all Australians to “help us keep our sanity, remember our humanity.”

Moz said the song was created to bring attention to the plight of himself and other refugees.  “We have been left in political limbo for four years now.   The conditions are hellish and how they treat us is deplorable. I hope people who are listening to my song will understand our desperation, frustration and fear,” he said.

A group of volunteer Australian artists were connected to Moz in July via a participant in the Julian Burnside AO QC letter writing campaign to asylum seekers, and have mobilized to help bring the song to life and help Moz be heard. Renowned collaborative songwriting specialist, Dr Emma O’Brien OAM, has been working with Moz, passing each track of the song back and forth from Melbourne to Manus.

Rates of depressive or anxiety disorders and PTSD Rates of depressive or anxiety disorders and PTSD among asylum seekers and refugees on Manus Island are “among the highest recorded of any surveyed population”, according to experts, so Moz is at high risk. He suffers from severe insomnia, experiences violence and degradation regularly, and is malnourished. “You know I don’t know how could I survive in this place; I think no one could survive more than one week. Sometimes I feel that all of us, us refugees are
dead – it’s just our souls that are here in detention,” Moz said.

Dr O’Brien, who managed the recording and production process with Moz via messenger, said she was worried about the safety of him and all the refugees, both physically and emotionally. “I am astounded by his ability to be compassionate and his capacity for forgiveness, a forgiveness, I’m not sure we as silent bystanders of this human tragedy deserve. I know that’s why all the artists are involved, to do something -­‐ to send a clear message of humanity and compassion to our political leaders and decision makers,” she said.

As Moz said to Dr O’Brien as the song took shape: “This really brings me energy, it gives me strength, it gives me hope.”

Moz’s ‘All the Same’ video is now available to watch and download at www.ourhumanity.xyz The site also contains snapshots, photos and voice notes from Moz, testimonials from the artists who helped him produce the song, and more information about the project.

All the Australian artists donated their time and creativity; joining Moz with their voices in a wider call for the humane treatment of Asylum Seekers by the Australian Government and a call to action for their resettlement here in Australia. Moz, like 700+ people still at the Manus Island site, has been deemed a UNHCR certified refugee.

Dr O’Brien calls on all Australians to watch the video, listen to the song and share it as a message to Moz that he is being heard, and that Australians are listening.

Moz has dedicated ‘All the Same’ to all people in their refugee plight, to people who have lost their lives at Manus Island and especially to his friend and fellow musician Hamed, who was recently found dead. Moz and Hamed would often play guitar together.