About 80 people from BMRSG, Grandmothers for Refugees, Rural Australians for Refugees (RAR) and various Blue Mountains Churches came together at Lawson on Palm Sunday 10 April 2022 to hear inspiring speakers, show support for Refugees and insist that our Federal Government take more positive action in welcoming and settling Refugees in this country.

Folk Singer Pat Drummond shared his wonderful song “Jesus was a Refugee”. From Esmat we heard his story of having to leave Afghanistan 10 years ago, resettling in Australia and over the past few months his struggle to bring his elderly mother to Australia with the help of many friends in BMRSG.

Tashi from Tibet told us of the great importance Tibetans, many of whom have no passport and are officially stateless, place on passing the almost impossibly difficult Citizenship Test in order to gain their Australian Citizenship and a Passport.

Ivor Houston from Winmalee shared some of his thoughts and insights which he gained as he walked from the Indian Ocean to the Pacific Ocean during 2021. Not only did he raise huge sums of money for BMRSG and Act for Peace, he gained wisdom regarding our dependence on and responsibility for each other – our families, communities and country.

Councillor Romola Hollywood, Deputy Mayor of Blue Mountains City Council and representing Susan Templeman MP reflected on what she had heard during the day and the wisdom of each speaker. She also expressed thanks for the work of BMRSG, both in the Mountains and much more widely amongst refugees from many countries.

As well as our Refugee placards and banners which were enthusiastically waved at passing traffic [with replying toots and waves buoying up everyone’s spirits] we also had a stand from Mark and Mary Hurst detailing their involvement in Environmental activism regarding the Mt Walker Pumped Hydro proposals at nearby Bowenfels.

We are thankful for the hospitality of the Good Samaritan Sisters who open their grounds and facilities to us – and who have already penciled in our date for 2023! We were also especially thankful for the fine day – a rarity amongst weeks of wet weather. It was a day of inspiration and joy in being together after so many months cooped up with COVID and wet weather. 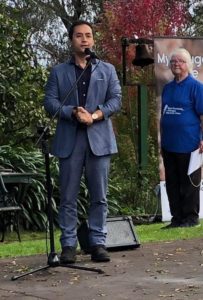 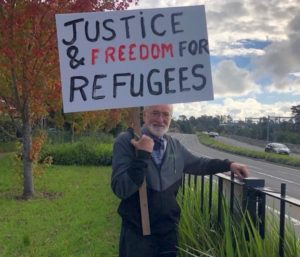 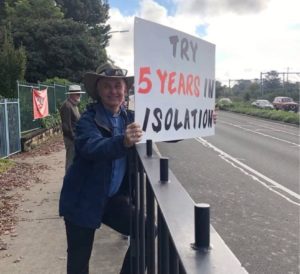 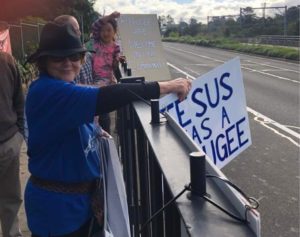 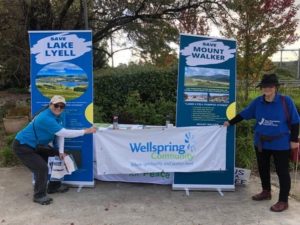 BMRSG is a refugee support organisation made up of ordinary Australians from all sides of politics. As one of the refugee advocacy groups in Australia, we have no specific religious affiliations. We are an incorporated association, registered in NSW and a registered charity. We are all volunteers.