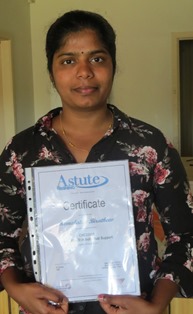 Latha and Bobi arrived on a boat from India in 2013. and were assigned to Adelaide where they lived for a couple of years.

After 2 years in Adelaide they moved to Toongabbie, NSW – linking up with friends from the same boat.  Latha and Bobi have 2 daughters – Lakshya and Akshya 5 and 3 years..

Almost immediately, they cleared part of the rented house garden  and grew vegetables.

Latha’s English is very good as she grew up in India and learnt some English at school.   Bobi  fled from Sri Lanka and later met Latha. Bobi is a hard working and industrious man.  Soon after arriving in NSW, he obtained  a job with a painting company. He never received any wages – each week he was promised “Next week”. The painting job lasted about 6 weeks and he learned a great deal. When it was finished he asked the boss again for his money and was told “That was your apprenticeship”.  He has since worked with a few other painting companies and the boss at the latest firm was keen to sponsor him!!

By then, however, they had been granted a SHEV visa so they are now locked into that programme of working in a rural area where they will move in a few weeks.

Latha was always keen to gain skills too. She did flower arranging for some months, then enrolled in Aged Care work and after about 8 months training has graduated. For a lot of the training she worked at weekends because of their young children. She is currently doing a 10 week course in home assistance – for those with need of care, showering, etc, as well as dressings and other issues.
Latha has also learned to drive as it is essential for visiting older or sick patients.

BMRSG assisted them with the legal costs for their Visa application.