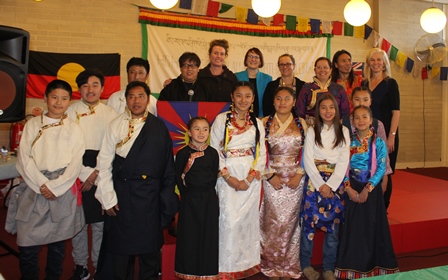 The old library was transformed with colourful Buddhist prayer flags and tables brightly decorated with bowls of sweets and Tibetan pastries. Tibetans in traditional dress, the chuba, circulated between the tables chatting and serving tea and sweet rice.

Auntie Carol Cooper gave the Welcome to Country before offerings of the traditional ceremonial white silk scarf, the khata, were made and laid before a photo of the Dalai Lama. The khata symbolises purity, compassion and respect. Kyinzom Dhongdue, the executive director of the Australian Tibet Council and member of Tibetan Parliament in exile, presented the first khata. Her offering was followed by khatas presented by local Tibetans and some of the Australians who attended.

Many local dignitaries joined the celebration alongside the Tibetan community, including the member for Macquarie, Susan Templeman and Blue Mountains MP, Trish Doyle.

Ms Doyle wished the Dalai Lama a happy birthday and offered a message of peace and hope praising the ‘colour and vibrancy of these strong but gentle people’. Ms Doyle also commended the ‘beautiful, caring, collaborative community of the Blue Mountains’ for welcoming the exiled Tibetans.

Next Ms Templeman spoke of her ‘great compassion for what is occurring’ in Tibet. ‘We want to do everything we can to support you here and support families back home’ she said.

‘I feel very joyful that we are here to celebrate a birthday’ said Ms Templeman but then recognised that ‘geopolitical help’ is needed to progress the Tibetan cause in Parliament saying ‘there are people working fairly quietly to see that justice is done’.

There are approximately 50 Tibetan adults and children living in the Blue Mountains and many arrived in Australia on humanitarian visas. All of them are refugees or children of refugees who fled Tibet after the Chinese occupation in 1950 and made the long trek over the Himalayas to reach safety in Nepal.

The journey to Nepal is a hazardous one with some travelling distances up to 1000 kilometres and facing unpredictable weather, storms, frostbite, altitude sickness and risk of capture by the Chinese Army. It is estimated that about 150,000 Tibetans have fled their homeland since the Chinese occupation, with most settling in India and Nepal.

The first Tibetan refugee settled in Katoomba nine years ago and others arrived after the Dalai Lama visited the Blue Mountains in 2015. In the last six months some families have arrived directly from India on humanitarian visas. Ms Dhongdue praised the local community saying that Tibetan refugees had been ‘embraced with warmth and love’.

For Tibetans living in exile the Dalai Lama’s birthday is an auspicious occasion and is connected to Tibet’s almost 70-year struggle for freedom from Chinese occupation. During her speech, Ms Dhongdue, reminded the audience that the reason that Tibetan refugees living in exile are so organised and united in their struggle is due to the Dalai Lama’s extraordinary leadership and vision.

‘His Holiness, the Dalai Lama has set up institutions’ said Ms Dhongdue, ‘that will keep the community together in exile for many generations’.

Ms Dhongdue wished ‘His Holiness a very long and healthy life’ and passed on a birthday message from the Dalai Lama to his people saying that ‘His Holiness the Dalai lama is doing very well, he’s 83 but hopes to be with us for another 10, 15, 20 years’.

Mary Waterford from the Blue Mountains Refugee Support Group praised ‘the world’s most famous refugee’ calling on Tibetans to ‘stay Tibetan, for the world is a richer place for all the different cultures that we bring to it’.

The overwhelming feeling from this event was not one of a people in despair. There was no bitterness or anger, only hope and faith in the Dalai Lama and his vision for the future. For the Tibetans living in the Blue Mountains, there are still challenges to be faced with finding employment and housing but they have embraced this community and it has embraced them. Despite being so far from home these Tibetan residents are very happy living in the Blue Mountains while at the same time remaining connected to Tibet.

Student performers from the Tibetan school entertained the audience with song and dance. While the wind howled outside and blew down boards and decorations onto the stage, the students sang with smiles and laughter. Volunteers from the Tibetan community teach the students at the Kunsang Yeshe centre in Katoomba on Saturday mornings. Tibetan schools are an important part of the way in which Tibetans maintain their cultural identity and language while living in exile.

The event was funded by a grant from the BMCC after discussions with the Tibetan community facilitated by the BMRSG and the Katoomba Neighbourhood Centre.