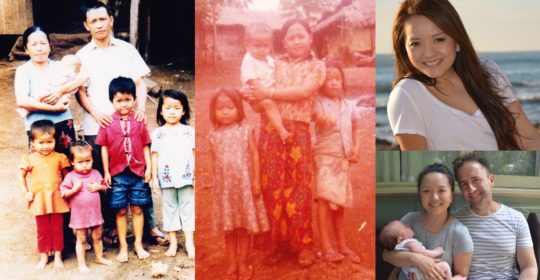 What is it about my refugee face that is different to yours?

I am the refugee face of an eight month old baby who escaped from Laos to Thailand, crossing the Mekong River in 1975 with my family after the Vietnam War.  I spent my first four years in Ban Vinai Refugee camp in Thailand where we received food and clothing from United Nation before immigrating to Australia in 1979 with my mother and four siblings.

My father and his second wife along with their eight children went to America. They didn’t want us to burden their brand new life so we followed my oldest sister and brother in law who were already living in Australia.

My parents were separated during the war for ten years. My mother buried her first daughter when she was five years old then trekked through the jungle for a week with her ten year old daughter to reunite with my father who unbeknown to my mother had married a second wife.  Among the Hmong people polygamy is common. Hmong women had no rights to their children.  In a divorce situation the wife would have to leave the house without the children.

Our lives were already broken before we made it to a new country.  And with broken dreams we would strive even harder to make something right.  To make something of ourselves.  We didn’t know what to expect from Australia.  We hoped that we would have enough to eat, shelter to keep us safe and dry and an education so that we may be in a better position than we were before.  We hoped to have a place just to live our lives in peace and that our children may have the same chance.

What have I done with that chance?  I have worked in various roles as a Fashion Designer, Product Manager and Buyer for 25 years.  You’ve probably felt beautiful in one of my designs.  I have reduced the risk of your children being burnt by quality controlling children’s nightwear, ensuring that each garment carries the right fire labelling.  I have paid taxes that have probably helped a pensioner to live out her or his life comfortably.  Probably helped a single mother to raise her child or children.  Helped someone who was out of work or cannot work.

I have also raised money to help a not for profit organisation to fight against trafficking children in the sex trade.  I am a wife to a doctor and sustain a happy home so that he may focus on saving lives at the hospital.  I am a mother who is raising a child that will contribute to our country and future.  I help the mothers in my community by cooking for them when their children are sick.  My brothers are electricians and have probably given you light in your home or on your street.  My sister has helped to deliver goods to your Woolworths store so that you and your family do not go without. My family had probably served you hot bread that you have enjoyed from their bread shop.

After 40 years in Australia, my refugee face is the same.  I have changed my name but I have not changed.  Instead, it is our community and economy that have changed.  That has learnt not to fear.  That despite the thousands of immigrants settling into Australia, you still have enough to eat.  You have more things than ever before to fill up your homes.  You still have an abundance of opportunity. And most importantly you have your freedom. Freedom to just be and to live is the right of every human being.

It is the responsibility of everyone to ensure that goodness prevails in times of adversity in order to nurture the human spirit so that individuals may have the opportunity to create the best version of themselves.  Life is meant to thrive, to be at peace and to live. This is the light in humanity which has no face. No race. No condition. It simply is, just kindness.