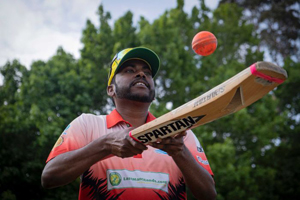 The video was shown on ABC News Breakfast midst the bush fire news on Monday 6  January.

After surviving what he describes as two death threats, Anustiyan Sivapalan made the decision to flee Sri Lanka for Australia.

“They come to my home, they tried to kill me, but luckily I escaped from the shootout,” he said.

While the psychological scars caused by an experience like this are too complex for many to understand, Mr Sivapalan has found a community where stories like his are the norm.

He has been playing cricket for a suburban western Sydney team called Ocean 12 that is comprised of Tamil asylum seekers.

Ocean 12 was founded by Noeline Nagle, a retired sports teacher, who volunteered with the Blue Mountains Refugee Support Group by visiting single men in both the community and Villawood Detention Centre.