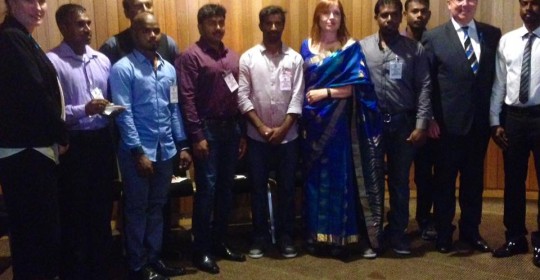 On Tuesday 23 February Julia Finn MP, member for Granville welcomed the Oceans 12 cricket team to the NSW Parliament.
The team is comprised of Sri Lankan Tamil asylum seekers. They entered and won the Last Man Stands Sydney Sports League competition and went on to win the statewide competition. They are the current Sydney champions and have won the Western Sydney World Cup three times.

Julia Finn praised the work of Noeline Nagle and Anne-Marie Clifton of Blue Mountains Refugee Support Group.  She said that they had “done an amazing job to bring the team together.   In 2013 they secured a grant of $10 000 from Wenty Leagues for uniforms and equiipment to get them started.”

Their team manager, Bala Vigneswaran, has transformed them from passionate cricket fans that had never played the game or worked as a team, into champions.