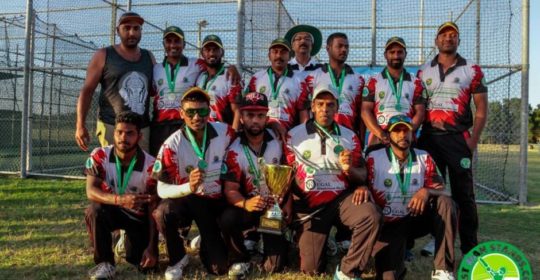 Report ABC AM  by Katherine Gregory

A group of Sri Lankan asylum seekers have claimed victory both on and off the cricket pitch.

The team was almost in tears after winning a national Twenty20 championship at the Gold Coast on Wednesday night.

The Tamils in the team, Oceans 12, have come a long way from thwarted attempts to play their national game inside some of Australia’s immigration detention centres to now winning the semi-professional tournament run by Last Man Stands.

But player Purusothaman Srinivasan said the team has maintained its focus on the game, more than the prize.

“When we are winning, our mind is happy. If we are losing, we go back to think about what is our problem,” Mr Srinivasan said.

The 36-year-old said he left Sri Lanka to Malaysia in 2008 because of war and ethnic violence.

He went to Christmas Island in 2013 and then to an immigration centre in Adelaide before settling in western Sydney on a bridging visa.

This was where he got involved in the cricket team, which was organised by the Blue Mountains Refugee Group.

“[It was a] good platform for me, because many days I was in the detention centre I [experienced] torture and trauma mentally,” Mr Srinivasan said.

“We are interested in cricket, we love cricket and also at the time, we wanted to relax our minds. We had a lot of pain inside.”
He said it has also helped him and others on the team assimilate in Sydney and also learn English.

Mr Srinivasan said the team name, Oceans 12, is inspired not just by the well-known movie, but also the year many of the players came to Australia as asylum seekers.

Team captain Suthakar Senathipillay said he has always been crazy about cricket but never got a chance to play properly until now.

“There’s a lot happening back at home … politics will always be there.

“There’s lots going on for the refugee people — people’s cases getting rejected, people getting sent back home. All the problems still continuing at home.

“Cricket takes our mind off things, keeps us occupied. On top of that, when we receive so much support from everyone … it brings us forward.”
Mr Senathipillay’s interpreter said he also feels much more accepted in the community because of his involvement in the cricket tournament.

‘When I first played them, they were ordinary’

Tom Downey from ‘Cults’, one of the tournament’s Sydney teams, said Oceans 12 are a strong group of guys.

“When I first played them, they were ordinary. They were still finding their feet,” Mr Downey said.

“We could compete with them at that stage … and since watching them play cricket today they demolish everyone that comes up against them.

“I think the community they’ve been able to form, they’re such a strong group of guys now that all support each other.”

He said cricket, like all sports, works as a great leveller.

“They realise they’re not that different. When they can play the shots that you can play, when they can bowl as well as you can bowl and then they can beat you as well, it becomes a new respect formed from that,” Mr Downey said.

“I think that’s why these guys have been so successful because they’ve been able to find something they can do well and do it well with a community of people that give them the respect they deserve.”