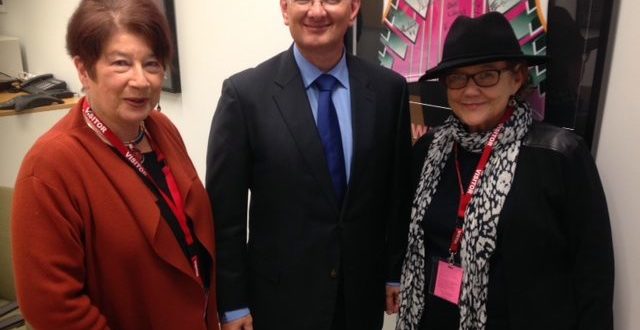 The trip to Canberra with Marie Sellstrom President of Rural Australians for Refugees went quite well.   The politicians and advisers did engage with us. They all liked their presents of woolly hand knitted finger less gloves and hats from the Blue Mountains Ladies Hospital Auxiliary. What’s not to like in cold old Canberra!

We met with Kathie McGowan’s adviser initially who had set up all our meetings.  Her student volunteer escorted us around all day – we would have got lost without him! We first met with Dutton’s office. Mr Dutton ended up in another meeting and we met with his main adviser and an offsider who promised faithfully to deliver his hand woven scarf made by the beautiful Marion especially for him.  He certainly needs special love and attention! The advisers were interested in our work, liked our pamphlet and were ready to talk about what the government was doing to address the causes of the refugee problem. They were interested in regional refugee resettlement options. I think we might get in there again.

We then met with Shayne Neumann, Ged Kearney, Sue Templeman and the Advisor to Kristina Keneally (the bells kept ringing and Kristina could not get out of the chamber). However Genevieve (her advisor) is planning a trip to the mountains and is friends with Donna Mulhearn one of our members. At these meetings we discussed Immigration Detention, the use of handcuffs on people seeking asylum when they went to medical and counselling appointments, SRSS, resettlement, The Amendments to the Migration Act, the RAR Statement on People Seeking Refuge and Asylum and the Andrew Wilkie Bill. We gave them  the latest list of what was happening in detention, which several said they would use to raise questions at Senate estimates.

The politicians all agreed to work to block the amendments to the Immigration Act which would allow dogs in detention centres and remove phones and continue their opposition to SRSS changes. Shayne Neumann gave us a letter he wrote to Peter Dutton stating that the Minister had created fear and panic in a group of vulnerable people especially when the decision was made without any analysis of how many people would be impacted and what the impacts on children would be.

The best news was that Andrew Wilkie tabled the Refugee Protection Bill 2018 on Monday to set up a regional framework for countries to work together on protection, support and assessment and resettlement for people seeking refuge and asylum in the Asia Pacific region. A great alternative to the current system. Unfortunately neither George Winston nor myself who were both heading to Canberra at the time could get to Parliament house in time for its presentation but RAR did make it and were acknowledged.

Now we know a bit more on how it all works I think we should
1.Write and thank each politician we met with and remind them of what we said
2. Meet with liberal sympathetic pollies next time and get Russel Broadbent to organise it
3.Keep promoting the Andrew Wilkie Bill
4. Take country type presents each time we visit.