PLEASE HELP URGENTLY AND SHARE.
The Guardian ( Swan Hill) has launched this e-petition to help bring landscape gardener and SES volunteer Rohullah‘s young wife and baby daughter to safety in Australia. It is hoped this will set a precedent for other Afghans in the Mallee to be reunited with their families, by first helping Rohullah’s family who are in significant danger while they remain in Afghanistan.

To sign the petition, visit this link: https://www.aph.gov.au/e-pet…/petition/EN3265/sign/confirm
You will need to include your email address. You’ll then be sent a confirmation link to which you must respond to confirm your signature. Let me know if you have any questions.
I met Rohullah when he stayed in my Blackheath home in September 2015.  He was on a Ride 4 Refugees mission from Swan Hill to Canberra.  Rohullah Hussaini has settled in Swan Hill, works as a landscape gardener and is a member of the local SES.
%nbsp;
See below the the story we posted on our previous website 25 September 2015. 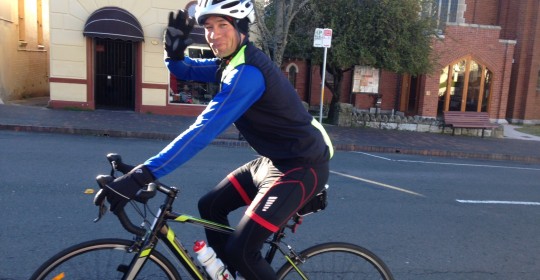 Afghan refugee Rohullah Hossaini soaked up some mountains air in Katoomba on Friday September 11 on his way to Canberra as part of the Riding 4 Refugees mission from Swan Hill.

Mr Hossaini, a landscape gardener from Swan Hill, said he decided to make the 2000 km ride after an incident on a Melbourne train. A woman sitting next to him asked him what language he was speaking on his phone. He asked her if she could guess. Her response was to say he looked like “a good old Aussie boy”. When she learnt he was from Afghanistan she asked him not to speak to her again, telling him that “You are coming here to take us over”.

Mr Hossaini said that more than anything he wanted to make the ride to raise awareness of refugees and asylum seekers.

He said it was a waste of taxpayers’ money that the government spent $120,000 a year per refugee to lock them up in detention centres.

“I don’t want to spend my money (as a taxpayer) in this way, to put human beings in a detention centre. These people actually want to work. They’ve come here to help their families, to make a better life for their families,” he said.