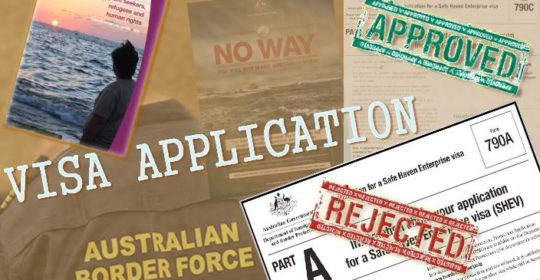 Wonderful news! A couple with two children applied for a Safe Haven Enterprise Visa (SHEV) and BMRSG assisted them with their legal costs. They were terrified of being deported back to danger.

They had their interview with the Department of Immigration and Border Protection about five weeks ago and today they received a letter saying that their application had been approved.

The family: Aiesha, (the mother), Yaj (the dad) and two daughters (4.5 yrs) and (2.5 yrs), arrived in western Sydney almost 2 years ago from Adelaide.

They are an industrious family. Aiesha is a good advocate for many, and has excellent English. They grew vegetables very soon after arriving but mis-estimated the heat of the Australian summer!

Yaj sought work in many areas- eventually getting a job as a painter. He worked on a job for about 8 – 10 weeks, never receiving payment – being assured that it would all be paid when the job was completed. At the end of the contract he asked for his wages. The Boss replied “That was your apprenticeship – no pay”!!! But he now has the skill and is more street-wise!

They received a letter from the Department of Immigrations and Border Protection (DIBP) stating that they must apply for a TPV or SHEV visa. By then Refugee Advice and Casework Service (RACS) was inundated so they needed to get a ‘private lawyer’. They secured one and BMRSG contributed to the costs. He was clearly a keen and active lawyer and submitted their application rapidly and attended the DIBP interview about 5 – 6 weeks ago. These interviews are conducted for the adults separately and last a long time – the DIBP looking for any inconsistencies.

So, such great news. Aiesha called and was so overwhelmed by the news. She kept saying “Thank you, thank you” – crying at times – “We couldn’t have achieved this without your Group’s help”.

Over $13,000 was raised through donations early this year when DIBP wrote to asylum seekers living in the community demanding that they put in applications for TPVs (Temporary Protection Visas) or SHEVs within 30 or 60 days, or risk losing all their sources of income, such as Centrelink payments.

Not their real names
Report from Kate Blakney