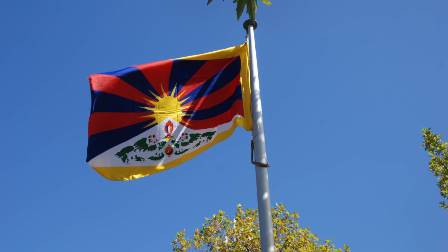 It was a morning of hope and sadness as about 50 local people, mostly Tibetan families and children, gathered in the Peace Garden in front of the Blue Mountains City Council building in Katoomba to mark the 60th anniversary of the Tibetan Uprising on 10 March 1959.

Tibetan community organiser Samzin thanked the Blue Mountains City Council for hosting the first Tibetan Flag-Raising ceremony by an Australian local council, then the flag was raised as the Tibetan national anthem was sung.
Councillor Kerry Brown, representing the Mayor, hailed the contribution of Tibetan culture to Australia and the world, and praised the work of the Dalai Lama, spiritual leader of Tibetans in occupied Tibet and in exile.

A Tibetan refugee living in Katoomba related how he spent four years in a Chinese prison for having defended the Dalai Lama as the legitimate leader of the Tibetan people.  He was tortured and beaten and lost many of his friends, glad to be in Australia but still traumatised by the suffering of his people under Chinese occupation.

Trish Doyle MP then welcomed the Tibetans in exile to the Blue Mountains, praised their courage and resilience and joined them in their hope that one day their ancient homeland will be free.