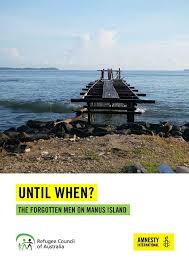 This joint report by Refugee Council of Australia  in partnership with Amnesty International, tells the story of the men who have been sent by Australia to Manus Island, Papua New Guinea (PNG), and what has happened to them after they were forcibly removed from the ‘regional processing centre’ on Manus Island one year ago.

The system the Australian government has designed for refugees and asylum seekers, has a kind of evil and devastating effect. It can ruin the very inner strength of human spirit. To the outsider, Fariborz [Karami] took his own life [on Nauru in June 2018], but the truth is the system took his life. There is no alternative explanation, and we must hold
the Australian government accountable for this action.

…. It feels like it is Australia’s ultimate goal to put every vulnerable refugee and asylum seeker into an inescapable corner…We have now lost seven lives from the hell of Manus and five from Nauru. All were full of life. I don’t know how many more lives they want in the name of this policy.

– Imran Mohammad, a Rohingya refugee once in PNG, now living in Chicago, 20 June 2018 (Writing Through Fences)

One year ago, the Regional Processing Centre (RPC) at Lombrum Naval Base (located on Manus Island, Papua New Guinea), where refugees and people seeking asylum were being detained, was closed. The centre housed hundreds of men – refugees and people seeking asylum – that Australia had been sending there since July 2013. Some in the centre refused to leave. Some feared for their safety in the local community. They also feared what would happen to them once the centre had closed, and the Australian Government washed their hands of them.

Those men were forced out brutally, first by the withdrawal of services, then by the withdrawal of food, water and other necessities, and finally by force. They were sent to live in three ‘transit centres’ on Manus Island, two of which did not meet basic standards, all of which feel and operate like detention in another guise.

Their fear that they would be forgotten is being realised. No longer technically in ‘detention’, their plight has dropped off the radar. They are less visible, more dispersed, and have been cast into a different kind of limbo. The only real prospect of getting out for many has been the United States (US) resettlement deal, but this has become an increasingly faint hope with a high rate of rejections of some nationalities, and an extremely slow pace of application processing. The pace of people being forcibly returned home is also accelerating.

Prolonged and indefinite detention, combined with bleak future prospects, is breaking many of these men. Since August 2017, three men have killed themselves. Many more have tried. In recent months, one man tried to hang himself, another tried to set himself on fire, and a third swallowed razor blades and nail clippers. Yet the Australian Government has cut mental health support in half and ended torture and trauma counselling that was previously a lifeline to many.

Other refugees and people seeking asylum are in severe, prolonged and unnecessary pain, as they try to deal with their increasingly complex and chronic medical conditions with reduced support. After the closure of the RPC, there has been a significant reduction in availability of health care. The current health clinic on Manus Island is much smaller and harder to access, meaning many people
have to rely on an overstretched and under-resourced local hospital.

Now, refugees often have to pay for their own medications, medical reports and health care after hours. They must do so out of their meagre allowances or by relying on the generosity of ordinary Australians who have fundraised for them and organised money transfers. It is increasingly impossible for refugees and people seeking asylum in Papua New Guinea (PNG) to be transferred to Australia for medical care, even when they have physical or mental health conditions that cannot be treated in PNG.

In spite of the cloak of secrecy that surrounds offshore processing, the men on Manus have been bravely speaking up for themselves. They have written books, made films, drawn cartoons, and taken photographs, highlighting their daily abuse. They have asked us, again and again, to treat them as humans, to understand what is happening to them, to understand why it is wrong, and to speak up
for them in ways that they cannot.

At a time when the tide finally seems to be turning on the brutal and illegal policy of offshore processing, we must make sure that these men, both the brave and the broken, are not forgotten. We can never give them back what they have lost, but we can and must give them a way to get out of the hole that we have put them in.

The Refugee Council of Australia and Amnesty International recommends:

To the Australian Government

End offshore processing immediately, and bring them to Australia, or a safe third country.

While this is being implemented:

To the Papua New Guinea Government

The Refugee Council of Australia and Amnesty International make the following recommendations in respect of the refugees and people seeking asylum sent by Australia to PNG:

Ensure that all refugees:

Recommendations to both governments:

Ensure that the principle of non-refoulement is respected in practice and that no individual is forced to return to a country where he is at risk of persecution or other ill-treatment.

Accept and co-operate fully with third countries willing to provide safe settlement of refugees rapidly, including but not limited to, the government of New Zealand.

Ensure that those who have received negative refugee assessments can seek judicial review of their assessments, with an interpreter, free of charge, and legal representation.

Ensure that independent agencies, including the United Nations, international and national authorities and non-governmental organisations, have full and free access to the centres to monitor the conditions and provide humanitarian assistance where necessary.

Until When? The forgotten men on Manus