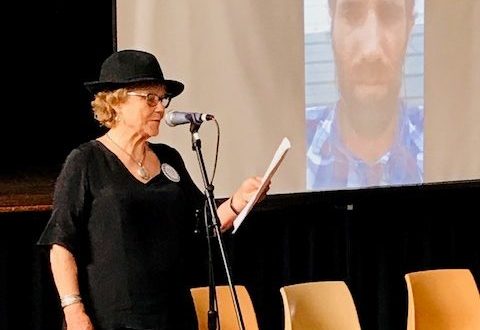 Kathie Herbert and Joy Connor did us proud in organising and running the afternoon around the local launch of Behrouz Boochani’s book, No Friend But The Mountains.

As an interested observer  I write to say what a professional group we have and what talented , hard working women Kathie and Joy are. Of course they could not have done it without the help of a great crew including Brendan, Eunice, George, Jude Finch and her team for the afternoon tea, and Jody from Megalong Books.

The success of the afternoon was assured when we saw a big smile on the face of Behrouz beaming in from Manus Island. An audience of nearly 150 gave Behrouz a standing ovation.

Although the line between Manus and Wentworth Falls was less than perfect at times , we got to hear from Behrouz Boochani and send him our love and support.

Actor Shane Porteous read excerpts from No Friend but the Mountains in a powerful presentation augmented by the haunting music provided by Paddy Connor.    Very moving and telling.

For me , being a political creature, another highlight was a short speech by former law professor Fr. Frank Brennan. He outlined his take on the current political situation regarding Nauru, Manus and asylum seekers. He also gave us a brief history of how we got to the current diabolical situation even with the small shaft of light of kids coming off Nauru.

Frank acknowledged that some would not agree with his analysis and conclusions and he respects that .

His main point was that we need to separate the issue of stopping the boats from the efforts to shut down and evacuate Manus and Nauru.

Frank believes that most Australians are opposed to what is happening on the two islands and want kids and their parents moved to a better place.

He suggests that those who do not support ” stopping the boats” save this campaign until after the coming federal election.

In the meantime we should focus, he suggested, on ways of getting all those confined now for more than five years, off these islands.

He suggested also that PM Morrison will do nothing to upset Peter Dutton. He added that the current government is the most inept and blundering since the McMahon government ……. and we know what happened to them.

Fr Brennan commented that he had visited BMRSG three times over the last decade and continues to be impressed by our energy and strength.