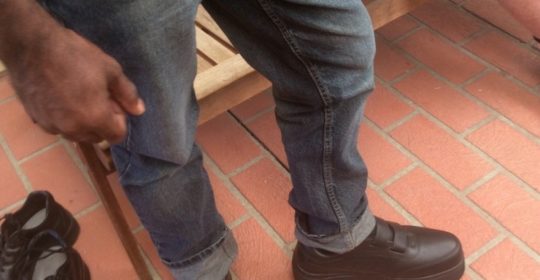 Ever wondered just where BMRSG spends the most welcome donated money. Let me share a story with you.

In November last year Tavam’s children were attending the swimming school we were running. Tavam accompanied the children and in this delightful non-threatening environment Tavam told me about his well-worn boots. They were issued in detention years ago and have been his only footwear . These are not ordinary boots but boots with specialist built up sole on one shoe.

During the war in Sri Lanka he was badly hurt by a bomb. One leg is now considerably shorter than the other. He suffers from hideous back pain as a result. He knew he needed new boots but there was no way he could ever afford them. He asked me to accompany him to his appointment at the University Clinic at Westmead. The staff there knew Tavam and explained to me why new boots were essential. I was shocked at the extent of his injury and in all the years I have known him I have never heard him complain.

An appointment was made with an ORTHOTIST-PROSTHETIST. The build up required was calculated and we then had to embark on a shoe shopping expedition . There were detailed and essential requirements . We searched and searched …..I aborted the mission over Christmas ( just too hard to handle) Finally on the 1st February we found the shoes. Delivered the shoes on the same day for the alteration to take place and today (20th Feb) we picked up the shoes. The smile said it all. He didn’t wear them home but rather took them in their box proudly under his arm.

It will take him time to get used to his new shoes. Hopefully in time his back pain will be less of a problem.

I felt proud that BMRSG was prepared to cover the costs and you should be proud that you made that donation to make this possible.

He asked me to specifically thank BMRSG. A beautiful sincere thank you. Makes it all worth while. Noeline
*Tavam isn’t his real name. 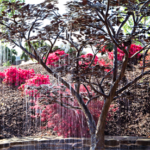